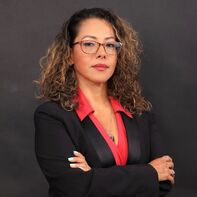 ESPAÑOL
Liz Gutierrez was born in Cali, Colombia. She and her family left Colombia for the United States, and moved to Long Island, when she was 12 years old, to escape economic depression of the country of the 1980s. Liz attended Brentwood High School, where she graduated in 1989. Due to her academic achievements, Liz received several scholarships from organizations including the National Association of Hispanic Journalists and the Association of Latin American Students. Liz attended Suffolk Community College and obtained an Associates Degree in Liberal Science. She transferred to SUNY Old Westbury, where she earned A Bachelor's degree in Journalism and Communications.
​
While in college, Liz interned at the Assignment Desk for News 12 Long Island and at the News Department for Telemundo Channel 47. Upon her graduation, Liz was offered a full time position at Telemundo, where she worked as an assignment editor for 5 years; working side by side with some of the top reporters in the Latin media including Jorge Ramos, Luis Alejandro Medina, and Ricardo Villarini.
Liz also worked as a freelance reporter at NBC as an Assistant Assignment Editor and later worked as a Production Assistant for the WNBC Morning show. In 2001, Liz began a ten-year tenure as an Assignment Editor at Univision Channel 41. Later, she became the station’s producer of the weekend newscast.

Throughout her career, Liz has covered a variety of news stories of interest to Long Islanders including segments on crime, education, politics, the economy, severe weather and breaking news. Among her career highlights was her interviews with noted personalities including Edward James Olmos, Cristina Saralegui, Shakira, Juanes, and Marc Anthony. Liz also played a prominent role in labor relations, while at Univision. She served as the employee’s union shop-steward for the production unit IBEW for eight years. During that period, she represented more than 50 employees including cameraman and production staff at the TV station as they battled for increased employees rights, better contracts and job protections.

Liz won 3 Emmy nominations in the news categories and a recognition by the NYPD for successfully assisting a man who suffered from Alzheimer's reconnect with his family after several weeks through her reporting. In 2011, Liz joined the Long Island Railroad as a Public Information Officer, where she provided commuters with real time information on LIRR service and delays. In 2016, she was promoted to Public Information Supervisor, where she leads a team in getting information to customers via traditional, digital and social media communication platforms including station signs, live announcements, customer emails, mobile applications, the company’s website, Twitter and Facebook. Liz was also recruited to work on several special assignments with the MTA press office focusing on communications geared towards its Spanish speaking customers.
​
Liz lives in Hauppauge with her two children, Sergio and Clara.
¡'Árbol de Crecimiento' Recaudadora! 'Tree of Growth' Fundraiser!